Currencies is a reference list of the currencies used by the company.

Currencies are used in the expense requests, allowing the user to indicate expenses in any desired currency, which will be automatically converted into the basic one.

Base currency — the main currency of the company. In order to set the basic currency, please open System Settings and use  Settings form to choose the desired value.

How to add new currency

Open the list of  Currencies. Use the action dashboard to Create currency. Please indicate the Name of the new currency, its code, and click Create button.

It’s recommended to use international classifier codes for the currency codes in the system:  https://en.wikipedia.org/wiki/ISO_4217

It’s impossible to change the code of the currency after creation.

This card allows the user to set the main parameters of the currency, as well as exchange rates. 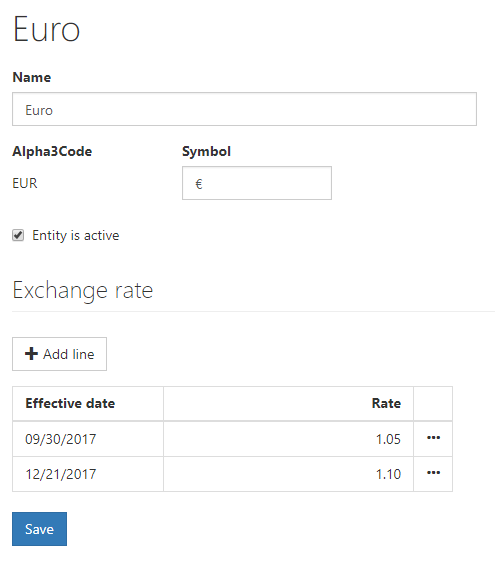 The exchange rate is used for automatic conversion (coercion) to the Base currency.

The exchange rate has to be indicated relative to the Base  currency:

Important!  All retrospective changes of the currencies WILL NOT result in recalculation of sums and totals in already existing entities .